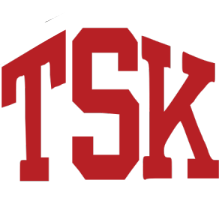 Texas19871
TSK Exteriors replaced my entire roof after hurricane damage in 2017. I have had nothing but problems with their crews, managers, and owner Troy Krisle. They promised to use their own crew, but sent sub-contractors from Texas instead. While removing shingles, new shingles were installed over the garage- that crew was kicked off the job and I was promised that area would be re-shingled but that did not happen. They did not install the shingles I had asked for, and then refused to make it right. They submitted to the Inspector’s office that the roof replacement was completed, and the inspector signed off on it. When the solar company climbed on the roof to install solar panels they noticed that the ridge caps were not installed at all!!!!! I had to fight with the Inspection team who said “sorry, we aren’t allowed to climb a ladder to do our inspection”, and TSK to order the ridge cap shingles before they could complete the job. Now for the worst part… My roof never leaked even after the hurricane, but a few months after the roof was installed I had a leak in my garage ceiling. They have been out at least ten times to locate and repair the leak, but never succeeded. It has been nearly 4 years now, and a 4-man team as well as the owner came out for an entire day to locate and patch/repair the leak. They said they did an “ice water test” with no leak found, and repaired with a horrible looking “Hawaiian wave”. NOW I HAVE ABOUT 8 FEET OF MULTIPLE NEW LEAKS IN MY GARAGE! DO NOT USE THIS HORRENDOUSLY INCOMPETENT COMPANY!!! I WISH I HAD NEVER LET THEM TOUCH MY ROOF, AS I HAVE EXTENSIVE DAMAGE DUE TO THEIR INSTALLATION AND REPAIRS!!!!!

Darlene Sippio
I don’t have a lot of money and I don’t have a high paying job and this company understood that. They put my roof on and whatever was left over they let me pay in installments. They didn’t tell me what to pay, I was asked what I could afford and with no stress, no constant phone calls, no harassment whatsoever. Today I made my last payment so one debt down and a million to go. I wish all companies would work with you like this and they did because I made my payments. I was not always on time but I reached out and let them know and they was okay with it. Thank you TSK Exteriors I will always keep you in mind if ever needed.

Brenda Barton
Wonderful work and customer service. I requested screen room repair and it was handled professionally and efficiently. Would highly recommend.

Randy Carter
Troy, Lori and Ralph were a pleasure to work with..They rebuilt our chimney and added a new cap..Their expert installation not only took care of the problem but improved the appeaarence of our home..I highly reccomend TSK Exteriors.

Kent Miller
I called TSK Exteriors when someone working on my roof noticed that four vents up there were disintegrating from the UV light of the sun. The owner came out and took a look and later, sent his 2-man crew to do the repairs. Tanner and Tate did a wonderful, professional repair job which will prevent my roof from leaking in the future. They came right on time and worked very hard in the hot sun to get the job done professionally. I highly recommend TSK Exteriors for roofing and repairs professionally done at a fair price.

Kathryn Rees
TSK EXTERIORS is absolutely the best company that I have ever dealt with and I hire alot of companies. From the moment I met Chad I knew I was in good hands. He is very knowledgeable and professional. He takes into consideration everything the customer needs, wants and can afford. I highly recommend this company for roofing needs and all other jobs you might need. Ty and Susan Rees

Jennyffer Santoya
They were very knowledgeable knew how to work with the insurance.And worked very fast.We are so grateful for their work and would recommend them to anyone who needs their roof done or anything else in your home.

Karen C. Seddon
We have a beautiful cream-colored metal roof that we will be able to enjoy for many years. We can actually hear the rhythmically beautiful rain on our roof now. We are grateful for the hard work and help with insurance.
Google rating score: 3.9 of 5, based on 34 reviews.

Located in St. Cloud, Florida, TSK Exteriors LLC has been providing quality roofing, window, and gutter repair services for almost 30 years. We are family owned and operated. TSK Exteriors aims to constantly improve and increase its efficacy we can provide our customers with quality roofing services.

Our exterior home improvement services include installation of screen enclosures, gutters, and windows along with comprehensive repairs. Contact us for an estimate today.

TSK Exteriors is a member of St. Cloud Chamber of Commerce and the National Roofing Contractors Association. We are committed to quality service and solid roofing projects. We are still open to serve you.

Contact TSK Exteriors for roof repairs, gutters, and window replacement needs. We handle the damage, the insurance company, and any other issue that comes along. www.tskexteriors.com

Monday thru Friday 9am to 5pm 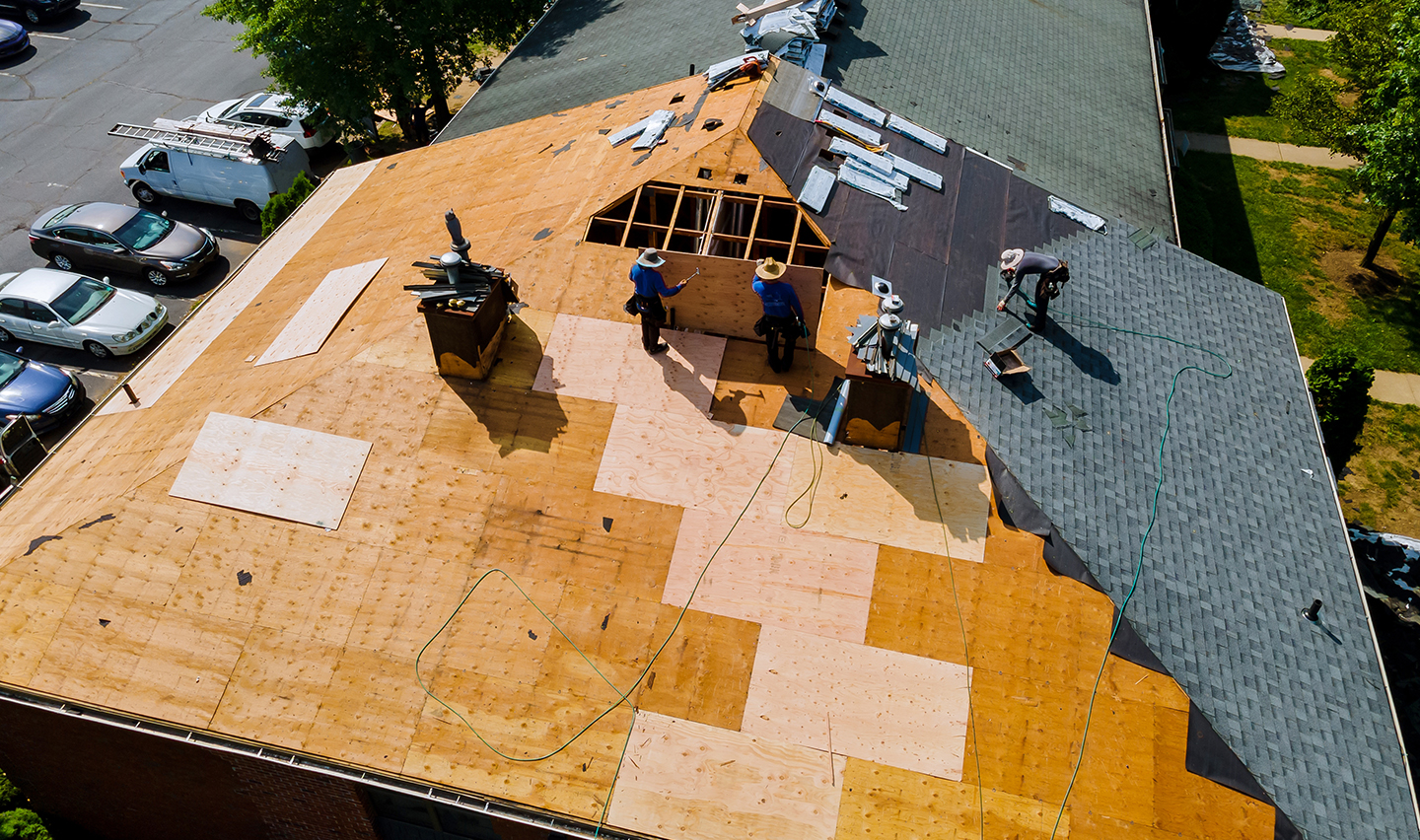 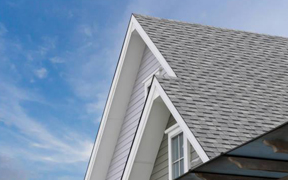 We offer residential roofing for houses, mobile homes, condos, duplexes and more. We offer estimates for all roofing types including shingle roofing, metal and tile roofing. Our skilled roofing specialists are extremely efficient and will ensure your new roof will be installed quickly and correctly without any problems.

There are a lot of companies out there offering great roofing deals — Make sure you pick the right one!! TSK Services is a family owned and operated local business with over 30 years’ experience in the Orlando area. If you are looking for a roofing contractor in Orlando, Ocala, Kissimmee anywhere in between, give us a call and let us see how we can help you get the new roof you need! 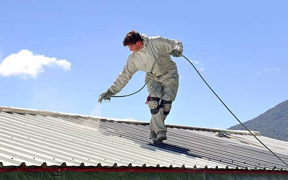 We offer competitive prices, great customer service and high quality products to ensure every commercial roofing project we complete will leave a long lasting impression on the overall design and beauty of the building.

​We can handle any type of commercial roofing including industrial complexes, retail shops, apartment and townhomes, new construction, restaurants and more. Schedule your  estimate today with the best roofing company in Orange County, Osceola, Polk County to find out more.
When you need a new roof installed at your place of business, or if your commercial roof needs to be repaired, the only name you need to know is Reliant. Based in Ocala, Florida, and serving the Central Florida Area, we are the go-to commercial roofing company that local businesses trust for expert services.
TSK Exteriors is a member of St. Cloud Chamber of Commerce and the National Roofing Contractors Association. 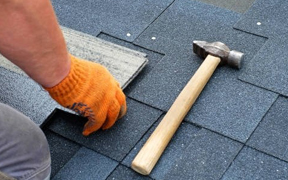 We realize that most people are not thinking much about their roof, but it is an integral part of your home which is an investment you value and want to protect. We all want to make smart financial decisions and be responsible with the energy resources we have. Therefore, we will assist you in understanding how your roof can save you money through lower utility bills, federal tax credits and reduced insurance premiums.

A roof often needs only minor repairs, not to be replaced. Many roofing contractors do not do repairs and will push customers towards a new roof that is not needed. As a homeowner, it can be difficult to determine that. 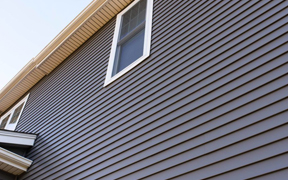 We add value and protection to your home while making it better looking at the same time. Choosing to replace your home’s exterior with siding is an important decision. TSK Exteriors siding experts have found that our customers enjoy the following once we’ve wrapped their home in beautiful siding.

– Repair or Replace Your Vinyl Siding – 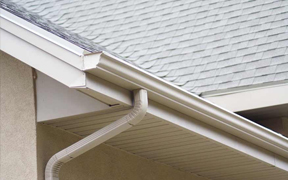 An experienced gutter specialist will contact you to arrange a good time to meet at your home or business. We’ll take detailed notes and create detailed diagrams. These will eventually be shared with the installers to ensure that the job is done as you expect. If you are not available to talk when we come, our gutter specialist will be happy to review the proposal with you over the phone. In the gutter services business, no one likes surprises

If you have storm or wind damage to your roof, you’ll likely be anxious to get it repaired or replaced and want to ensure a payout and subsequent repairs as soon as possible.

A roof insurance claim can feel like it is taking forever. This is when partnering with a trustworthy roofing contractor is essential – not only for your property, but for your home or business.
TSK Exteriors will work with you every step of the way and ensure that all your documentation and paperwork is in order and submitted correctly to your insurance company, and generally help things along until your roof is repaired, restored, or replaced.
Working with an experienced roofing contractor is especially valuable.